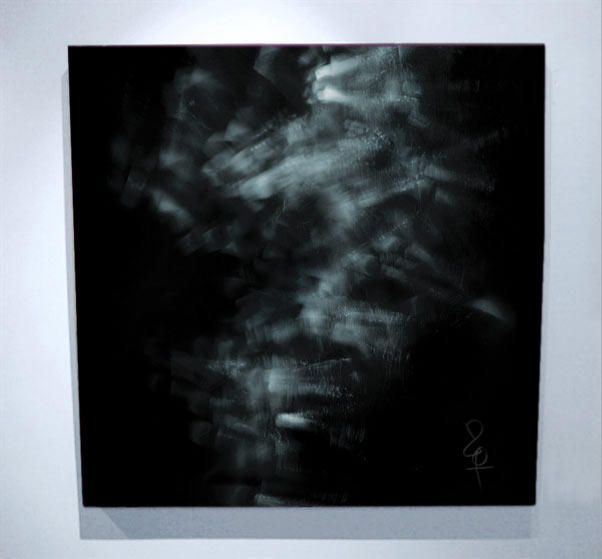 One of the most powerful pieces in the collection, "Grief" served as the first image to represent the upcoming project. From Ward’s rhythm came this remarkable visual. Though abstract, there clearly is a face that comes forward to the viewer. There are a total of 20 pieces of "Grief" in the edition. All are numbered. Each is individually signed by Bill Ward.


On the work, Bill Ward states:
"When I first saw the canvas ...just looking at the picture, I was just blown away. I was like 'what the heck was that?' The first thing I thought of was grief. That picture just fit it so well. If one had to pick up all the words and situations and things that have been going on from January 2012 to July 2013, that picture sums it up. It's really become personal to me. I couldn't think of anything more suitable than grief. Just a large portion of my well-being lately has been like that. I think its a great picrture... all the deep crevices in the man's face... the eyes... the nose is very prominent. And it also leaves a little bit for your own imagination, which is beautiful. You can do some thinking for yourself. It's a high impact picture and definitley suits the climate of the last 18 months."

High on a Memory

We Focus.
We Persevere.

Fire and Brimstone
(In My Pocket)

Making Flowers
From My Heart

Perfection As
A Distortion

Waiting For The
Next Moment

I Will Always
Remain Here
GET PRICING


For 45 years, Bill Ward has dedicated much of his creative life to rhythm. Ward’s career has taken him to every corner of the planet, with millions of records sold and a recording legacy that includes some of the most acclaimed recordings in the heavy metal genre. His sound is unique, and his influence cannot be argued.

“When I’m working on new ideas, musically much of what’s played is guided by a visual appearance or shape. Since my early childhood, I’ve played drums in visuals as well as sound. When I write, there’s always an image, sometimes a color attached to what’s being created.”

With Absence of Corners, Ward ventures beyond sound into the visual realm taking on a new medium – rhythm to canvas. The collection is a highly personal one and remarkably limited.

“I am delighted with the captured expressions from my head and my heart. Their arrival onto canvas is beautiful.”


An extensive process from start to finish, "Absence of Corners" took nearly a year to complete. Ward utilized a sophisticated formula to create the collection’s visuals, using an array of drumsticks and rhythmic accessories that produce light, much like a painter utilizing brushes and oils. Then, working with Los Angeles art team SceneFour, The movements featured within the captured rhythms are then studied and developed into abstract artwork that showcases a dimension not normally seen by the human eye. Each piece in this limited-edition collection is then numbered. All are signed by Ward.